How To Make More Sales By Being Assertive Without Appearing Aggressive

Have you ever backed off from a certain topic or point for fear of offending your prospect? This happens in sales conversations around the world every day. Sales people do not ask focused qualification questions because they are worried about push back.

But the truth is, salespeople are often more worried about the potential of irritating prospects than the situation warrants. It’s all in their mind. I find that the ones who obsess over not coming across as pushy often create boundaries for themselves that don’t need to exist – and ultimately kill their effectiveness and value to their business.

If you’re worried about crossing the line from confident and assertive into aggressive, here’s three strategies that will help you to strike the perfect balance.

1) Offer the conclusion, and then the explanation.
Many sales people think aggressiveness is a voice tone issue. They think that if they don’t sound aggressive, they’ll be fine. However, I beg to differ.
You could use the most respectful tone in the world and still sound pushy. How? It all comes down to your phrasing.
Which of the following two options comes off as more presumptive to you?
• “Who is the decision maker on this project?”
• “You know what would be easier — why don’t I just talk to the decision maker directly. Who should I contact?”
Even though the second phrase might have a more empathetic voice tone, it’s actually the more aggressive question. Providing the explanation before the question comes off as passive-aggressive, because it implies that the salesperson’s conclusion – in this case, talking to the decision maker directly – is not up for debate. It devalues the role of the prospect in the process.
When putting forward a question, don’t explain why first. Just ask. The shorter and simpler your questions, the fewer objections you’ll encounter. If your prospect asks for the explanation behind your question, offer it honestly — but not before they request it.

2) Accept the answer you get (even if you don’t like it).
When it comes to offending prospects, the damage is rarely done as a result of the question posed. The damage is done as a result of how the salesperson handles the answer.
Let’s say a salesperson asks their prospect “What’s your budget for this project?” and the prospect responds, “I don’t feel comfortable sharing that with you.” Most sales people in this situation would think “I just crossed a line” and immediately get on the back foot. But from my perspective, if you simply accept the answer and move on to your next question, you show the prospect that you’re not afraid to dig deeper — and also that you can take “no” gracefully. And that’s precisely the kind of person buyers want to work with.
The wrong thing to do in this situation? Ignore the prospects’ response by countering with something along the lines of “Okay, well, would you give me a ballpark?” The prospect already gave you an answer — and it was that they didn’t want to answer. Take the no, and move on. If you don’t, you risk being perceived as pushy and aggressive — exactly the type of sales person buyers want to hang up on.
Remember. ALWAYS agree with the prospect and move on.

3) Set the bar early on.
Many times, salespeople will wait until they build rapport with their prospect before asking them “hard” questions. The salesperson thinks that if they can get on friendly terms with the prospect, they will be more willing to open up. WRONG!
There’s a problem with this approach, and it has to do with expectation setting. If a salesperson only asks easy questions early on, the “hard” questions later will seem out of context. The prospect might also conclude that the only reason the sales person was nice at first was to soften them up — in other words, the rapport isn’t genuine. Far from getting the answers you want, you might just get the block you were so hoping to avoid.
I talk a lot about getting people to KNOW, LIKE and TRUST you, and it’s precisely around that third emotion why there is an issue going about sales this way.
My rule of thumb is to be confident and assertive, earlier. Ask those hard questions before you’ve provided the prospect with everything they want, such as a demo or a trial. That way, you have some leverage that will help you get the answers you’re looking for – not to mention you can qualify the prospect before spending more valuable time PLUS you set the expectation that the sales process won’t always be 100% comfortable or easy.
If you spend too much time worrying about coming off as aggressive, you probably won’t be assertive enough to get the information you need to help prospects. Use these three strategies to stay on the right side of the line, and make more sales. 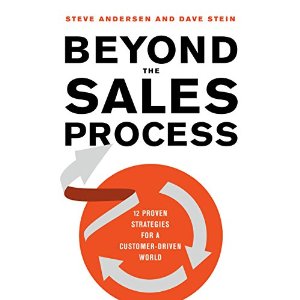 Beyond the Sales Process: 12 Proven Strategies for a Customer-Driven World

Featuring instructional case studies from companies including Panasonic, Hilton, Merck, and Honeywell, this evidence-based book provides listeners with a proven methodology for driving success before, during, and after every sale. Embracing the entire customer life cycle, Beyond the Sales Process reveals twelve essential strategies including: Study your customer. Give them compelling reasons to engage.