Why the Holidays Are a Great Time to Prospect - Accordant Partners

Why the Holidays Are a Great Time to Prospect 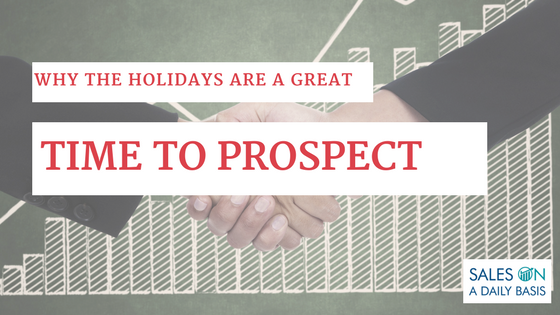 Most salespeople give up on prospecting during the holidays and instead focus their energy on closing a few remaining deals in the pipeline or heading home early.

But if you’re one of my savvy, sales-minded readers, you may be asking, “If everyone is kicking back, then couldn’t there be an opportunity to actually get through to those hard-to-reach prospects?”

The reality is that the holiday season is one of the best times of the year to prospect. (Of course, take off Christmas Day and New Year’s Day, you workaholic!)

During the other 11 months, prospects are bombarded by your competitors, busy as can be and protected by gatekeepers.

During the holiday season, many of your top prospects will be experiencing the opposite.

Let’s explore the key reasons why you and your sales team should consider putting some real energy into prospecting this holiday season:

The holiday season is the time of year when most salespeople tell themselves that nobody is answering the phone, making deals, or buying.

They have already checked out for the holidays and are not in business mode. Now in truth, that will apply to 50% of your prospects, (and all your sales team if you allow it!) but turn this assumption in its head and it think about it this way.

Have you ever called prospects, only to hear in their voices that they are overwhelmed with the 10,000 other things going on?

We’ve all been in there.

The average CEO or Business Owner has a shedload of work to do on any given day. But during the holiday season, things slow down.

Since many people are on vacation, not much work is getting done, and your prospects are often playing catch up.

They are relaxed, looking forward to the break, probably under little pressure from their own business (as many of their colleagues are also on holiday)

This creates a tremendous opportunity to connect with your top prospects when they aren’t distracted by the chaos that surrounds them during the rest of the year.

In conversations, getting past the gatekeeper is always at the top of the list of salespeople’s biggest challenges

Most of the time, a CEO or business owner is protected by a wall of people whose job is to ward off distracting salespeople.

During the holiday season, however, those gatekeepers are off spending quality time with family and friends while the boss is staying in the office.

By prospecting during the holiday season, you can often bypass gatekeepers altogether.

Yes, there are some companies where the holidays are the busiest time of the year and prospecting is not an option, but for most B2B companies, the holidays represent a slowdown in business.

People are more willing to talk during the holidays, so start off by contacting your current customers and asking them for referrals.

Don’t forget to be thanking your customers for their support this past year and taking time to determine what their current needs are.

It the perfect time to have a high-quality conversation and agree the next step.

After that, though, it’s only natural to ask for referrals — and, of course, while asking for referral, you can politely ask them if they would make the introduction for you.

Phone calls with a more personal nature are naturally going to garner more attention this time of year.

Most companies that week are on a very slow schedule with the vast majority of people taking time off.

With this being the case it means the phone is ringing less and there are fewer emails to handle.

All of this means you could be the person they do wind up talking to.

Many times, phone calls this time of the year are very productive because the prospect is pleased to know somebody else is working also.

Does this mean you can’t take time off that week?  No, you still can.

But if you’re determined to make a fast start to the New Year, then you’ll want to take a day or two of that week and dedicate that time to calling.

Again, there are many people who will ignore it, but there are also many who, because their business routine is not normal, will take the time to read your email.

An interesting piece I’ve noticed in my own business is my own website during holiday periods, including 3-day weekends, has traffic that stays on the website longer and more pages are viewed.

I attribute this to one reason — it’s the one-time period when senior level people have more time to dig into things they don’t normally have the time to do.

If you’re dealing with senior level decision makers, you will want to make sure your website and content is optimized to take advantage of these critical periods.

Prospecting during the holidays?  You should do it.  You really, really should.

I hope you found this useful. Feel free to add your comments – lets talk! 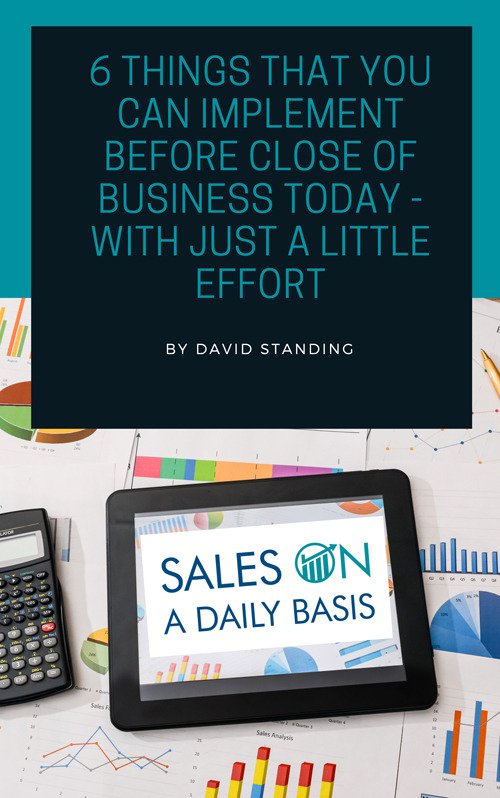 To help you take action straight away I have created a Checklist “6 things that you can implement before close of business today – with just a little effort”.

Follow these simple steps and you’ll be making sales straightway by uncovering the hidden gold in your existing customer base. I would love to send you my Checklist to you now, with my compliments.